Original Farm of Bartholomew To Be Sold

Posted on May 9, 2016 by bartholomewstovall

FrancisEmma and Bartholomew Stovall’s Farm To Be Sold

In an article released Thursday, May 5, 2016 by the Richmond Times-Dispatch stated that the leadership team of the Sisters of the Blessed Sacrament announced the unexpected sale of the 2,200 plus-acre property in Powhatan County. 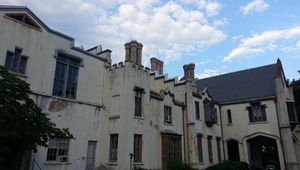 POWHATAN – Local supporters of FrancisEmma are still reeling after a surprise revelation from the leadership team of the Sisters of the Blessed Sacrament announced the unexpected sale of the 2,200 plus-acre property in Powhatan County.

The sale, which was announced on Tuesday, May 3, came as a complete shock to the five nuns who live and work on the property and the FrancisEmma Inc. board of directors, which manages it, said Sister Maureen Carroll, executive director of FrancisEmma Inc.

Carroll said the sisters who live with her at Belmead on the James and the board found out a few days before the announcement went public, but they are still in shock and disbelief.

“The sisters here at Belmead are extremely distressed by the announcement that went out,” she said.

The nuns’ feelings were echoed by community members in Powhatan County and elsewhere who have been working to both preserve and strengthen FrancisEmma for years.

There are generations of people with strong personal ties to FrancisEmma’s history as the location of St. Francis de Sales, a school for young black women, and St. Emma, an industrial and agricultural institute and a military academy for young black men. Before they closed in the early 1970s, these schools educated close to 15,000 students.

In more recent years, people have become entranced with the property’s beautiful setting and ongoing conservation work to protect the land and the wildlife it supports.

“FrancisEmma is a place of beauty, of history and of peace and it is a very important part of local history,” Carroll said.

Jennie Shuklis, chairman of FrancisEmma Inc., was at the board of directors meeting on Saturday, April 30, when the news was first announced and said it felt like she had the wind knocked out of her.

“There is shock, sadness, anger, grief. There is tremendous grief. Different board members have different feelings. Those are my personal feelings I have been working through,” she said.

Patricia Gunn, a former board member, wasn’t at the meeting but found out by email. For Gunn, the news was extremely personal. She is an alumna of St. Francis de Sales, just like her mother before her, her sister, and several cousins.

Only two months earlier, Gunn, who is chair of the FrancisEmma unto the Seventh General Capital Campaign, had spoken proudly of her time at the school at the dedication on March 5 of a new museum at Belmead Mansion that celebrates the property’s rich history. She also spoke of a bright future thanks to the many supporters who had rallied behind FrancisEmma in recent years.

So to learn about the sale of the property so abruptly was devastating, she said.

“I was deeply saddened and sorely disappointed that the work that has been so fruitful in the past 10 years was suddenly brought to a halt with no prior notice to the board, any of the Powhatan community, or any of the people in the state of Virginia who have been working so hard to preserve this history, this legacy and the land with so many species,” she said.

Carson Tucker, who represents District 5 on the Powhatan County Board of Supervisors, said he and others are dismayed by the surprise decision of the executive team of the Sisters of the Blessed Sacrament (SBS) in Bensalem, Pennsylvania to liquidate the FrancisEmma property.

The St. Francis de Sales and St. Emma schools established by Saint Katharine Drexel to give young black boys and girls access to a quality education have been part of the fabric of life in Powhatan County for more than a century, he said.

“They have represented SBS’s, Saint Katharine Drexel’s, and indeed the church’s highest commitment to humanity, equality, the environment and education,” Tucker said.

He went on to call the sisters who live at Belmead “nothing short of heroic in their management, maintenance, congruencies with SBS’s mission, and the search for adaptive repurposing of Belmead.”

Options for the future

Tucker said he wished the decision to liquidate the property had been done more transparently and collaboratively with alumni groups, historical and environmental groups, FrancisEmma’s neighbors and the community of Powhatan.

“Even now we as a community stand ready to engage in the discussion of how best to save Belmead and adaptively return it to the service of the people of Powhatan, Virginia and the nation,” he said.

Right now many people involved are working hard to assess all of the options they may have, Shuklis said.

“There are a lot of different plans on the table, and I am quite frankly not comfortable talking about all of them just yet until we have had a chance to look at them more thoroughly. But yes, of course, raising funds to buy the property could possibly be an option,” she said.

Hopefully, organizers will soon begin making appeals almost immediately to people in Virginia, members of the alumni groups and to people elsewhere who see the extraordinary value of what has been accomplished there over the last 100 years and more particularly during the last 10 years, Gunn said.

There could be a way to put together a consortium of people who value the extraordinary history and legacy of the property, which went from holding a plantation with slaves to later housing two schools for black boys and girls and now has been building a reputation for its conservation efforts, she said.

It is also critical to continue to tell the story about the schools and the education of black students that took place there, particularly in these often racially charged times, she said.

“We need to make sure people know this is a resurgence of racism. Unfortunately it is not new and here are some of the beautiful efforts that went into combating it 100 years ago and here is what we can still work on today,” Shuklis said.

Gunn said she doesn’t believe some of the members of the leadership team of the Sisters of the Blessed Sacrament have a full appreciation for the extraordinary contribution that their religious order’s efforts have made across the past 100 years and the fruits they continues to yield even to this day.

While people involved in FrancisEmma fully appreciates the enormous responsibilities that the leadership team have, particularly to the order’s older nuns, Gunn said she thinks the decision to sell the FrancisEmma property, when it is engaged in so many ministries, is a mistake.

“For people who rarely come for more than just a four hour board meeting to make a unilateral decision that we are not viable and that the ministries there aren’t viable, it actually flies in the face of logic and is extraordinary hurtful to all of the hundreds of people who have been involved in this whole sacred venture,” Gunn said.

She added she hopes the leadership team will “prayerfully reconsider all of the extraordinary good that they are doing.”

Shuklis and Carroll said they would also appreciate the community’s prayers and support as they move forward.

Laura McFarland may be reached at Lmcfarland@powhatantoday.com.

Included is the text from the Richmond Times-Dispatch.

For more information, contact FrancisEmmaBelmead@gmail.com.If you would like to view the text from the Richmond Times-Dispatch visit:

Laura McFarland may be reached at Lmcfarland@powhatantoday.com.