Posted on July 12, 2013 by bartholomewstovall

On November 11th, 1684, Bartholomew Stovall arrived in the new world, boarded a small transport vessel, and watched in awe as the craft approached the shoreline across the bay from the dying settlement of Jamestown, Virginia.  He knew his destination was the plantation of Dr. Richard Kennon, and he had knowledge that the Tidewater area was inhabited with similar operations scattered along the waterways that flowed into the James River.  Bartholomew’s thinking was correct, but it would take him years to understand the culture that was developing in the Chesapeake region of the American Colonies.

As the Seventeenth century was drawing to a close there were very few towns in existence south of the more populated  New England Colonies.  Plantations eventually grew into small villages but government and social order had yet to integrate into the populace of the Chesapeake.  There were a greater number of salves and indentured servants than those who owned their freedom and the ration of male to female was six to one.

The class structure consisted of plantation owners of immeasurable wealth, or the fortunate few who leased and farmed large parcels of land, followed by the poor, and then finally the slaves.

Plantations usually claimed thousands of acres containing vast fields cleared and planted with tobacco that produced harvests yielding tons of the auspicious crop bound for England.  These large farming operations owned slaves or held a contract on indentured servants.  Slaves were bound for life and could be sold or traded, the same as any merchandise, but indentures were bound for a set number of years providing they fulfill the terms of their contract.  Most indentures performed the labors of farming, but others were brought from Europe to fulfill the obligations of preparing meals, educating children, or conducting specialty-farming tasks such as blacksmithing.

They were a brutish lot and had but one agenda, that being the will to survive.   If a person were free and poor, there were very few places of worship and educating the young was the responsibility of family members.

All large plantations were located on a major waterway, which was used for transportation and crop movement.  Any settlement that was located away from the waterway was considered susceptible to a rogue attack by natives of the land, and if one attempted to venture too far into the wilderness their fate was dubious.

As stated earlier, when Bartholomew Stovall boarded the carrier and approached the shores of the Virginia colony, he did so of his own accord and traveled alone.  In short, the Chesapeake region was populated by individuals who, eventually, had to find their way, using their own means.

But looking north to the New England colonies there was a surprisingly different scenario taking place.  In 1620 the Pilgrims landed in Plymouth, but they were not a group of rogue young men willing to sell themselves for a period of indenture.   They traveled as families with a husband, wife and children and their cause was not to escape the hopelessness of poverty in their mother country.  They were seeking religious freedom and a desire to form a culture based on their form of a social society.  Although only half of the Pilgrims survived during the first year of settlement, they eventually laid the foundation for what was to become a model for the Puritans, who arrived ten years later with numbers in the hundreds.

The Puritans followed the lead of the first Pilgrims and traveled with nuclear families in search of religious freedom, away from the oppression and confines of the Church of England. 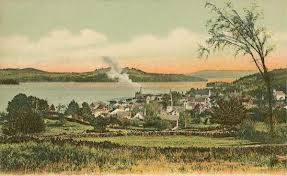 Their first order of business was to set up centers of trade in order to create a civil society as defined by their beliefs.  Churches were built along with schools and residences for those dedicated to their cause.   Places of worship were designated as governing houses, usually controlled by the religious elites or men who exhibited strong leadership qualities.

This model proved to be successful and by 1640 over 16,000 men, women, and children occupied the area around the Massachusetts Bay.  Because they traveled as families, the sex ratio was much more balanced than in the Chesapeake region to the south.  But more importantly, the survival rates increased due to a healthier climate, clean drinking water, and a heightened sense of emotional security.  In fact, the mortality rate among these early settlers compares favorably with modern day New England residents.  One historian, John Murrin, observed that New Englanders “invented” grandparents.  In other words, this may have been one of the first societies in recorded history in which a person could reasonably anticipate knowing his or her grandchildren, a demographic surprise that contributed to social stability.

Historians who have studied the disparity of social stability between the northern and southern colonies concede that the gap was due to the lack of traditional families.  The most likely cause can be attributed to the Chesapeake’s low mortality rate and the shortage of females.   Malaria and other diseases took a frightening toll and the drinking water was contaminated with salt, killing many in low lying areas.  One must also concede that female indentures spent most of their child bearing years in servitude.

From a historical perspective, the New England colonies were more advanced with their approach to creating a well-ordered society.  By 1650 near half of the region’s male population could read and write.  This was not accomplished in the colonies to the south for another one hundred years.  In the south, wealthy plantation owners were clearing fields and planting tobacco, totally dependent on slave labor.  In the north, towns were being built which contained schools and churches.  These were men and women with strong religious convictions working together with a common cause.

But as we enter the twenty first century it is fair to say that one region’s success does not define the entirety of a nation.  The present day mortality rate is evenly divided across the total populace, and one region’s strength may be seen as another regions weakness, depending on the matter of discussion.

But the most remarkable thing about modern day America is that regional culture is still evident from early colonial days.  The south is defined by its hospitality, which originated when seventeenth century colonial plantations always opened their doors to weary road travelers in need of a resting place.  New Englanders still hold true to their heritage and convictions, much like those who formed our first stable society.